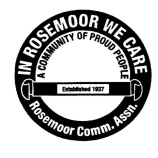 The residents of the community of Rosemoor have a vested interest in its schools, housing, businesses and churches. Our mission is to improve and expand the good in the assets of the Rosemoor community, to eradicate the negative elements that would endanger our legacy and to empower the residents to enhance the community. Our purpose is to promote the common good and general welfare of the property owners, residents and other interested in the community known as Rosemoor.

The organization Rosemoor Community Association, Inc. was founded in 1937 and incorporated on April 4, 1941 by Harry Elliot, Annabelle Peek and Palmer Magliocco. Edward Hughes was the Secretary of State of Illinois.

The boundaries extend from 100th to 107th Streets (north to south) and from Michigan to Cottage Grove Avenues (west to east). Rosemoor is made up of approximately 3,000 residents, 67 businesses, four elementary schools, and 30 churches. Rosemoor has 102 blocks, 13 streets and places, and 12 avenues.

~  Initiated the Business Person of the Year Award

~  Prevented the further exploitation of gas stations, fast food,         and liquor stores into the community